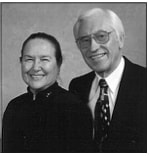 Phylis was born in Hackensack, New Jersey on October 23rd, 1925. She was president of her high school class and did modeling for 5th Avenue Bridal Shop. As an adult, Phylis spent many years working in apparel shops in San Diego, Newport Beach, and San José, California.

Phylis and Norman met while she was working as an American Red Cross Gray Lady volunteer. When Norm looked up and saw Phylis, his world stopped and the song "One Enchanted Evening" began playing in his head. He was hooked. The couple was married on Father's Day, June 21, 1959. After their marriage, Norman adopted Phylis' two children.

Norman's job was to locate and evaluate hospital locations. Due to Norman's job and with Phylis as his associate, the couple traveled extensively. The were able to explore many points of interest around the world, visiting Europe, China, Japan, the Philippines, Australia, and more. They took a train trip through Manchuria, viewed General MacArthur's apartment in Manila, experienced Vienna on New Years' Day and Rome on Christmas Day. The visited Napoleon's incarceration post in Alba, France, spent a day in North Africa, and explored the tunnels at the starting point of the Bataan Death March.

The couple left Southern California for Lincoln County in the 70s. They bought Sea Towne Shopping Mall in Newport, which Phylis helped manage. Phylis was part of the first Central Coast Trade Mission to Japan under the leadership of the late Governor Victor Atiyeh. This trade mission is credited with opening the door to trade with Japan that continues today.

They sold Sea Towne in 2000 and took a subsequent trip to Rome. Phylis was fluent in Italian, so time spent in Italy was  extra special. They moved to Vancouver, Washington for over a decade, returning to Lincoln County in 2014.

After a long and fruitful life, Phylis was diagnosed with Alzheimer's disease in early 2017. This eventually lead to a fall that broke a hip and another fall that left her with a broken wrist. After a time in a rehabilitation facility, Phylis returned home to be cared for by Norman, hospice, and her caregivers, Alice Shinn and Virginia Slonecker.

Phylis passed away February 22 in the arms of Norman.

Phylis was loved by everyone she met. She is survived by her husband Norman and 2 children, Susan Longo of Hashbrouck Heights, NJ, and Ben Johnson who resides with Norman in South Beach, four grandchildren, one great grandchild, and a sister, Katherine Pedrin in New Jersey.
Site powered by Weebly. Managed by MacHighway