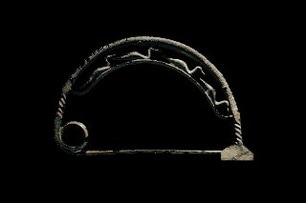 Etruscan Fibula
Few people are aware that the common safety pin has an ancient history, one which begins somewhere in Europe in the 13th Century B.C. Archeologists are indeed aware that safety pins, technically call fibulae, were invented in the Bronze Age in Europe. Some scholars suggest that fibulae have some special powers in a sanctuary or tomb. Dead wore more fibulae than the living. They were used as votive gifts to Gods and Goddesses. 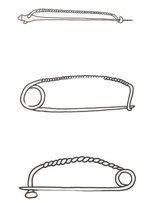 Bronze Age Fibulae
Archeologists found a man buried under Gordion who had 37 fibulae on his body and a bag containing 145 more. A child found in a Roman cemetery had 9 placed on her body.

The German scholar Kossinna has called fibulae “the most important of all ornaments” for archeological study. One had to be excessively well dressed for entry into the other world.

Thus, the familiar safety pin, an unpretentious article of daily use in the modern world, takes on a new significance.

(Excerpts from an article written in 1964, Ancient Safety Pins: Their Function and Significance by Oscar Muscarella). 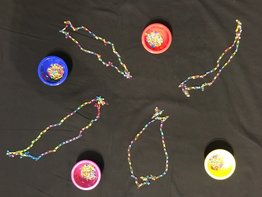 The safety pins we use in our events are 00, the smallest size available. They are 3/4" long x 3/16" wide. We and our event guests make chains of varying lengths from the pins. Observing the different ways our guests work with a small bowl of safety pins to create chain art is part of the adventure of Connecting US 20.

Finding a source of supply at a cost we could afford proved a big challenge. After following many blind alleys in China and the US, we located Creative Impressions as a source. After several small buys, Sal reached out Creative Impressions and found an enthusiastic supporter in Janet, so we appointed her Captain of our Tropical Safety Pin Team. Captain Janet's kind assistance has enabled us to freely spread color and community across the United States.
Our guests enjoy playing with the safety pins. Check out this slideshow of people and pins.
Site powered by Weebly. Managed by MacHighway